With many wedding fashion shows under way it would seem lace is making a bit of a comeback, we generally see more bride’s choosing strapless gowns especially during the summer months.

When Kate Middleton married Prince William it came as a surprise to see so much lace work was on her dress. The  dress was made by Sarah Burton, Alexander McQueen.  and was certainly not what most people were expection, White wedding dresses became popular during the reign of Queen Victoria who herself had extensive lace work on her dress. 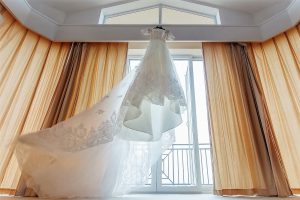 Historical true lace make its appearance around the late 15th century, often silk and gold thread was used, it requires great skill if being done by hand.

Bridal Fashion week saw some beautiful creations by many designers, one of my favorites was by Monique Lhuiller who has used lace in a unique way by creating a cape to go over a simple strapless wedding dress, traditionally we often see extensive lace work on the veil but I have not seen it used in this way.

New way to use lace

The use of lace can be very effective in revamping a simple plain wedding gown and could help save costs, however sometimes it is the small accessories that can eat into the budget as good quality lace work can be very expensive to source.

Search around and chek for a lace making club nearby,traditional crafts are making a come back.If you know someone who has this skill you could have something unique and come up with your own design.

I once attended a traditional wedding where the bride had a lace veil with her family crest on it, she had wanted a more modern wedding dress and this was a compromise that pleased the family.