Its hard not to shed a few tears at a wedding after all it is one of life’s events that bring happiness and joy, families and friends come together and share the love felt as loved one’s make a commitment to one another. New family members to welcome, new friendships forged and generally a feeling of happiness all round. 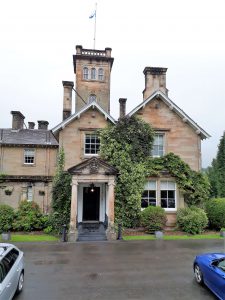 Summer can be very hit and miss here in Scotland and it certainly did not look promising the day we arrived at Auchen Castle Hotel, which is situated near Moffat in the borders of Scotland, however on the day of the wedding the weather came through with blue skies and sunshine.

We do have many more impressive castle’s here in Scotland and at one time there were over 2000, seems like historically we had a love of building castles, however Auchen castle has a charm all of its own, warm and inviting just loved my stay there wished it was a couple of more days.

Brief history of the castle

The original castles dates back to 1220 it was built by Sir Humphrey de Kirkpatrick in the time he was the Senestal of Annandale , it is said that he was a close friend of Robert the Bruce and King Robert whom he entertained at the castle. “if walls could talk what stories we would get to know.”

The Kirkpatrick clan left behind the castle some time ago along with their estates which came under the ownership of the Clan Johnstone, through marriage it passed to 1st Baronet Sir William Younger of the Younger’s brewery family.

The castle we see today was largely completed in 1849 by General Johnstone and over a century and a half later the castle still maintains many of the original features, such as the Victorian spring water catchments and reservoirs that supply the hotel today.

The castle grounds contain many unusual species of trees and plants which was brought to the estate over the centuries some of them have a rich history and there are varies that are unusual.

There are many great photo opportunities around the grounds and if weather is good you could hold your service on the front courtyard. Just beware if the ground is soft and your wearing heals you will be sinking into the ground a bit also be prepared for the dreaded midge’s , the original skin so softly from Avon works well and they have a sunscreen with in the cream so protects and gets rid of those bugs. 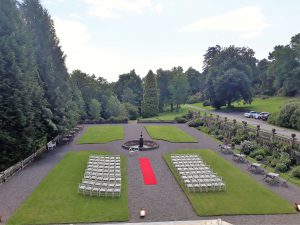 We were going to have it indoors however since the weather was nice and the wedding party consisted of 110 guests it was going to be a bit tight in the ceremony room, felt nice to be outside and it got quite hot as the day progressed

Auchen castle has become a very popular wedding venue as well as accommodation in the original part of the castle they have a more modern extension which has a similar set up to a travel lodge however each room enjoys lovely views around the grounds. 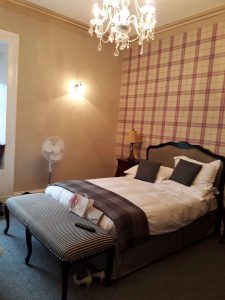 I was staying in room 16 which is a luxury room it was tastefully decorated, spacious and I liked the window seat feature which looks out onto the front garden which is how I captured the setting up of the wedding outside.

The ensuite had a lovely old fashioned bath tub which fitted in with the theme of the castle,you could just soak in the tub and see the beautiful views from the window.

They also have suites and should you get married there you get one as part of your package, they were spacious and had quite impressive four poster beds.

Just remember if you stay in the older part of the castle power points are not always plentiful, though extensions were available.

I have to say the staff were wonderful nothing was too much trouble and they worked really hard to create a wonderful wedding experience and they certainly did, the day of the wedding felt relaxed and even when the ceremony was changed from indoors to outside they just got on with the job in hand..

After the beautiful service we mingled around and canape’s were brought round whilst the couple headed off to get some more pictures done, the selection of canape’s  which included some tasty mini burgers went down a treat until it was time for the meal, nothing worse than feeling hungry and having to wait hours for food.. 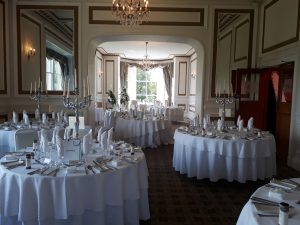 I like to go round and take pictures as everything is getting prepared for the wedding, it is nice to see how it all comes together, even though the staff had a lot to do it all seem to be calmly flowing along nicely.

As there was over 100 guests at this wedding and it did make the seating quite tight in places, however it looked wonderful  and the food was really good.

One thing I did like is that they had plenty of staff serving and it was well organised, everyone knew what they had to do. There are two exits from the dinning room which was good, all the little extra touches made the difference.

It was wonderful to see everyone enjoy the event the only regret we had is that it did not go on longer, most of us had arrived on the Friday night and we had a BBQ, time to catch up on family, friends and get to know the groom’s side of the family more. Even though it was a BBQ we all ate indoors as theweather was not that good and those pesky midgee’s were doing the rounds again.  I think it was just as well the wedding was a bit later in the day, quite a few suffered from hangovers next day.

The bride wore a beautiful lace dress in ivory and the bridesmaids wore pretty lemon dresses the only small glitch was that the flower girls sandals got left behind and it was thanks to some of the guests this got sorted out, so double check folks if you have a wedding coming up.

I thought this was a beautiful wedding cake and tasted good a simple two tier cake decorated in flowers, cake maker did a grand job, it does fit in with the summer season nicely.

It can save some money if you select flowers that are in season and I do think it gives a touch of elegance to a cake.

The evening consisted of a buffet and there was sure plenty to go round, though I still felt quite full from the meal. It is worth considering how much you want to spend on a evening buffet especially if your meal is later in the day, if most of your guests are at the whole event they may well not need a lot of food later in the evening. 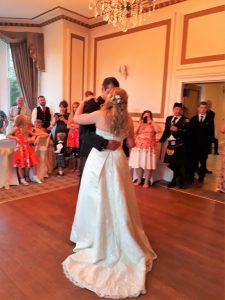 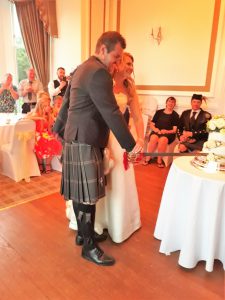 Time to cut the cake and get on the floor for the first dance, just what you need everyone watching !!!

Soon the day would come to an end and what better way to end it with a fire work show, certainly was a wonderful display enjoyed by everyone and the children were really excited. I hope you will join me in wishing Jeni and Ems a life of happiness, health and wealth.

6 thoughts on “Love Happiness and Romance found at Auchen Castle”